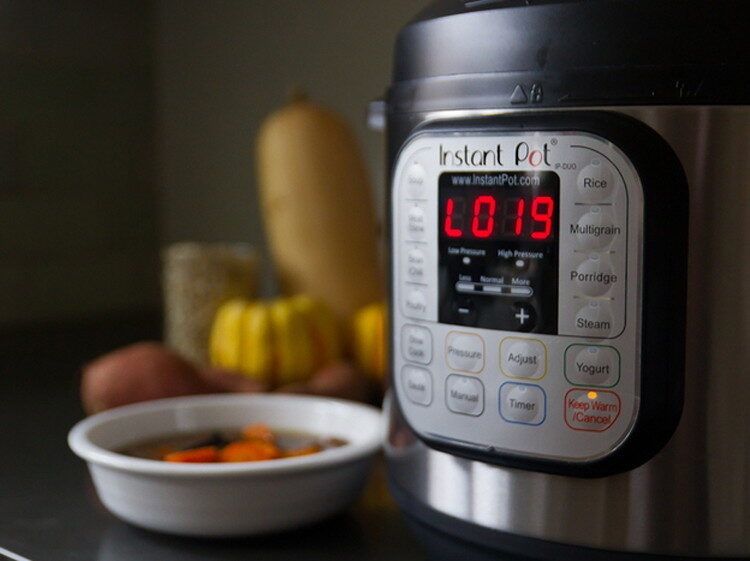 Is it a slow cooker? A rice steamer? Or is it a pressure cooker? The Instant Pot is all of the above and more!

This thing may just replace the majority of your kitchen appliances. I’m not kidding! The cheapest Instant Pot starts around $99, which is really a bargain if you consider everything it can do.

Here are a few tips and tricks for your new BFF in the kitchen:

1. Use round containers when freezing meals so they’ll easily fit in your Instant Pot.

Prepping a bunch of homemade freezer meals? Instead of laying them flat in the freezer, freeze them in large round containers, or place the zip bag in a large container until frozen, so that you can just pop them into your cooker — no defrosting required!

For meat dishes that you’d normally cook in a slow cooker for 8 hours on low or 4 hours on high, your Instant Pot can easily cook it in 20-25 minutes! (If you’re like me, this is a lifesaver — I plan out slow cooker meals in advance and then completely forget to set them before I head out the door for the day.)

Set your pressure cooker to the Meat/Stew setting for red meats and the Poultry setting for chicken. Just remember to set the to “sealing” and not “venting.”

3. Use it instead of your microwave.

Use the Keep Warm or Slow Cook function to heat food instead. Adios Radiation!

Speaking of a microwave replacement… your Instant Pot can make some pretty tasty popcorn — way better than your microwave can. You’ll just need some butter or coconut oil, salt, and kernels. This is a money saver also!

5. Remember to purchase an extra liner if you use your Instant Pot daily.

Instead of constantly washing (or forgetting to wash, rather) the same inner pot after every home-cooked meal, consider buying a backup. It’ll cost you about $30 on Amazon.

While you’re at it, an extra sealing ring (grab two for $12) may also be helpful if you use your cooker often.

6. Layers: meat on the bottom and pasta on top.

Yes, you can make whole pasta dishes in your Instant Pot! Crazy, right?

Keep the meat on the bottom so it gets heated through without sticking to the pot. Just throw the uncooked pasta on top of the other ingredients. Bonus: you don’t need to fully submerge the pasta in liquid, the steam from the pressure cooker will cook it perfectly!

Pressure cookers like Instant Pot typically need about 20 minutes to build the pressure that will speed up cooking. But you won’t always have time to wait for that.

To avoid that extra 20 minutes of waiting, set your cooker to Saute, then add any liquid called for in the recipe (or ingredients that could actually use some sauteing such as onions, garlic, or celery) along with some olive oil. While those ingredients saute, prep the remaining ingredients needed for the meal, throw them in the pot, and then start the pressure cooking! This allows steam and pressure to build up faster.

8. End in Saute mode to reduce sauces or prepare a gravy.

Add flour or corn starch to the sauce left over from cooking, hit the Saute button, and stir to make a quick gravy.

After your Instant Pot is done cooking, you can either release the pressure by switching over to “venting” mode or keep it in with the “sealing” mode. If you want that fall-apart goodness in the meat you’re cooking, let your cooker release pressure on it’s own.

The steam inside your pot will turn back into liquid and add even more moisture to the meat. It’ll take about 20 minutes to depressurize, but your meats will be more tender than they would be if you released the steam right away.

No need to defrost the meat prior to cooking; just place it directly into your Instant Pot and add enough water so it boils. You’ll also need to increase the cooking time by 50% depending on the cut of meat.

Since your Instant Pot is a pressure cooker, it requires some sort of liquid to create steam. You should always have at least 1/2 cup of liquid in whatever you cook. Don’t be afraid to add more if you’re low!

You read that right. Use it to pressure cook a New York cheesecake that’s good enough to serve at parties!

You can find hundreds of recipes tailored specifically for your Instant Pot HERE, including FREE e-books!