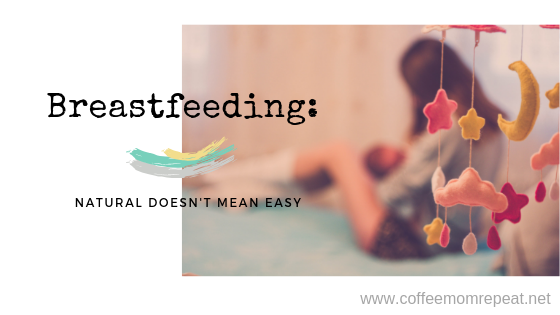 Sorry gals, this is going to be a long one. I knew from before I was even pregnant that when I finally had a baby, I would want to breastfeed. The desire to breastfeed increased even more once I actually came to be pregnant. My entire pregnancy I also stressed about whether or not I’d be able to and was always reassured that I would be able to do it just fine. I still wasn’t sold. There are so many stories in the media of people struggling and there is a reason for that.

Once Raelee was born she and I made our first attempt within an hour of her birth. All of the doctors and nurses were actually incredibly surprised with how easily Rae latched that first time. She knew exactly what to do, which was awesome because I was clueless! We really didn’t have any issues feeding while at the hospital. Of course, I felt some discomfort but I wouldn’t say I’d describe the sensation as painful. Coming home was a whole new ball game. 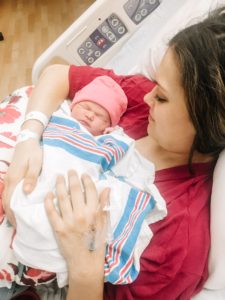 The first night went just fine but the second day was a nightmare. Thursday evening my milk came in. Raelee fed at 4pm without an issue, but every other feed following refused whenever I offered. She would try to latch and then just scream and scream, turn red, and hit. I had no idea what was wrong. Finally, after many attempts, yelling and plenty of tears from us both, at 2am I pumped a bottle for her and she took it.  You see, I had no idea what my “milk coming in” truly meant, I was a first time mom! By 2am my breasts were HUGE. They were so engorged and THAT is something I’d describe as being painful. So between being in pain, sleep deprived and having a newborn baby who was either sleeping or screaming and refusing to eat, I was a complete mess. Our whole family was.

Josh, my husband, had been encouraging me to pump for hours but I was so terrified of giving her a bottle. Breastfeeding was so important to me and I had heard so much about nipple confusion that I was scared if she took a bottle she wold never latch on to me again. I was also terrified of pumping. Would it hurt? How do I do it? There were so many questions unanswered but eventually I had no choice. Raelee needed to eat. Pumping that night fixed everything so it seemed. I had relief from the engorgment I didn’t even understand I was suffering from. Raelee finally had eaten. Me, being essentially milked like a cow from this tiny machine, was hysterical enough to break the tension between Josh and I and got us cracking up. Everything was okay, or so it seemed! At her next feed a couple hours later Raelee latched on easily again and we thought we were out of the woods. Then her 8am feed she refused again and we were back to square one.

At this point, Josh called the hospital. He explained everything we had been through that night. As soon as he told them about the long gap she had gone not eating they told us we immediately needed to bring her to urgent care. As you could imagine this sent me over the edge. I was so scared. I got ready quicker than I ever had even though I had this huge incision in my belly making moving painful (mommy adrenaline is a real thing, I felt no pain). Urgent Care told us we needed to get her out of there (not safe for an infant that young who hasn’t had any shots yet) and sent us up to pediatrics where we were seen immediately.

The pediatrician we saw told us it was a really good thing we had brought her in because even though she was okay, she was very close to not being. She was in a spiral of dehydration where she was so sleepy, she wouldn’t eat, and because she wasn’t eating the dehydration was getting worse, which in turn was making her sleepier. A seriously vicious, dangerous cycle. He then sent us to see the lactation consultant who explained to us that I was so engorged because of my milk coming in that she wasn’t able to latch. I was too hard, I was literally rock solid. She provided me with a nipple shield which is basically a little piece of plastic you suction over your nipple, gave me some tips and sent us on our way! The nipple shield was life changing. Feeds were no longer stressful, they actually were easy, minus the sleep deprivation. I was able to enjoy the bonding time as opposed to dreading the uncertainty of whether or not she would latch. After about a month I retired the nipple shield and we had a great nursing relationship! 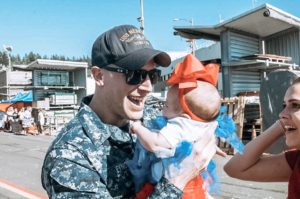 This went on for months so again, we thought we were out of the woods with breastfeeding difficulties. I was able to feed her in all types of positions; laying down, on my side, in the baby carrier, etc. You name it, we could do it! Then issues arose again when I went back to work in the office full time and she was being bottle fed during the day. At about 3.5 months old, Rae developed a bottle preference. Milk comes much more easily and quickly through the bottle without having to work for it so she wanted nothing to do with me. I would always offer my breast first but after listening to her scream for 10, 15, 20 minutes I’d cave and give her a bottle. I was no longer keeping up with her because everything I pumped she would end up drinking that same day. We eventually ran out of stored breastmilk and were forced to supplement. She was on a 50/50, formula/breastmilk diet. Every feed that she would latch on, I was sad to think may be her last. But I kept fighting. I kept pumping. I kept offering the breast first. We switched her bottle nipples to premie nipples to slow down the flow, we pace fed. I tried everything to boost my supply; from power pumping and Mother’s Milk Tea (both of which I actually do NOT recommend) to the Body Armor drinks and Starbuck’s Pink Drink (these I do recommend, but only because they’re delicious, I’m not sure they actually work to build supply) and so much more. After about a month we had eliminated the bottle preference. Or, she grew out of it. Either way she preferred to drink straight from the source again. I felt so accomplished. After a couple of weeks my supply regulated and I was able to build up a stash and take formula out of her diet. The first day I sent her to daycare without formula, I was so proud! Getting her back to being exclusively fed breastmilk had been my goal from the first drop of formula but in all honesty I never actually thought it was attainable.

Currently we are on month nine of breastfeeding and still going strong. I pump enough at work for her to have milk for the next day AND typically have 4-6oz that I’m able to freeze. I probably have about 200-300oz in the freezer! We only use the bottle at daycare and when she’s with me I feed on demand. Breastfeeding is something I never thought I would be so proud of and I don’t think it’s quite possible to understand how difficult it can be or how much of an accomplishment it is when you’re able unless you’ve been there! Just because breastfeeding is natural in no way means it’s easy. I fought to get to where we are. If you ask my husband he will tell you there were MANY tears shed at the the thought of not being able to do it any longer. I’m not going to lie, having to give her that first ounce of formula was really difficult for me to deal with. I did what I needed to do to keep my baby fed but all I truly wanted was for her to have my breastmilk.

Now, breastfeeding absolutely isn’t for everyone. I’m not here to shame those who decide against it, or can’t for any number of reasons. There are so many different reasons that women decide not to breastfeed. Some don’t even make the decision, the decision is made for them! As long as your baby is fed, that’s all that truly matters. I’m all about you doing what’s right for you and your family. I’m just here to say that if breastfeeding IS what you want but you’re running in to difficulties, don’t give up! Breastfeeding is NOT easy and whoever told you it was, is lying. It’s hard. It takes a lot of time. It can be so extremely exhausting but it is SO worth it. Breastmilk isn’t called liquid gold for no reason. If I hadn’t fought as hard as I did, we wouldn’t be going nine months strong. It is easily one of the most rewarding things I have ever done.

Now that you’ve heard my story, here are some tips for those of you nursing or planning to nurse! Keep in mind I am no expert, these are just from my personal experience.

Now, like I said, I’m no breastfeeding expert, I’m just a mama who has lived it and I hope you find these tips, tricks and stories to be useful! 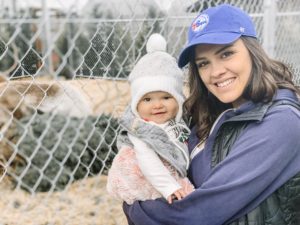 Hey! My name is Blake Eynon, pronounced eye-nin for every single one of you trying to sound that out 😉 I’m 23 years old and I graduated from Washington State University in 2017 with my Bachelor’s in Psychology. I currently work at my local community mental health agency. My husband, Joshua, is on a submarine in the United States Navy. Together we have the most perfect baby girl we could ever hope to have, Raelee Grace. She truly is our “Rae” of sunshine and we are so blessed to have her. Currently we live in Washington State, but in August we will be moving to Pennsylvania as hubby has orders to be a recruiter! We are so excited for what the future holds! I’m still newer in the blogging world as I started my blog back in October so bare with me while I get the hang of this! I’m so excited to connect with y’all! You can find me at www.blakewithoutcoffee.com, on Facebook, Pinterest, Instagram, and Twitter!

TEN Items You Need in Your Kitchen