From a young age, women are conditioned to feel guilty anytime they take up space, have an opinion, or make a request. Or breathe, really. Like many other women, I spent many years wading in the thick muck of other people’s opinions. I still get sucked in sometimes, but I’ve taught myself to stop feeling guilty for being myself.

“In short, women feel guilty for everything and its opposite. It’s like we’re feeling guilty for existing at all.” – Eloise Stark

Motherhood is full of opportunities for me to screw up my kids. The question isn’t so much if I’ll screw them up, but how badly and in what ways. I try to make the best choices I can for my kids and my family, even if they’re not popular.

Side note: the phrase “my family” includes me, because moms are people too and we deserve to have our needs considered as much as anyone else in our house does. Read that again.

Before I had kids, I thought I’d be the type of mom whose children ate 100% organic, all-natural, “clean” meals. It’s so easy to be the perfect mom when you don’t actually have kids, isn’t it?

Now that my little angels are here, I sometimes choose to feed them McDonald’s for dinner because I get tired and I’m not stellar with meal

At least the nuggets come with a side of apple slices. 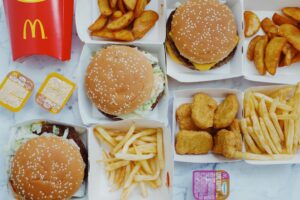 Once they’ve polished off their Happy Meals, my kids hop on the couch for a little Netflix-on-the-iPad time. I hover nearby to make sure they don’t stumble across an episode of “Breaking Bad” because that would be, well… bad. But

mostly, I use this time to clean up or fold laundry or fulfill some other domestic obligations.

The next day, the kids head to daycare/preschool so I can write, work on projects, and cling to some small shred of sanity. Yes, I worry they’ll catch “the virus,” but I’m also terrified of losing our spot at the school that took us more than two years to get into, or not getting their needs for socialization and structure met.

I can’t win here, and I know it. If I allow my kids to eat fast food, I’m ruining their health. If I let them have screen time, I must be ignoring them. And if I send them to school in person, I basically don’t care if they die. I’m a monster.

And if I fed them nothing but raw kale and baby carrots? Well, then I’d be one of those crazy health nut no-fun moms. If I didn’t let them have screen time, then I must be actively playing with them. Translation: I must not aspire to be anything more than “just” a mom. And if I chose to pull them out of school, then obviously they’d end up anti-social and depressed.

In summary: I could hold some serious mom guilt over pretty much every choice I make if I’m not careful. Better to do what feels right to me, ignore what other people think, and stop feeling guilty.

The list of things I’m forced to say “yes” to is quite lengthy. The list includes daily showers (well, most days), cooking dinner, brushing my teeth, doing the laundry, and running the dishwasher, just to name a few.

But for as many things on my to-do list that are necessary, there’s an equal number of things that aren’t. Society tries to convince us that we “have” to do everything, but that’s a big fat lie.

I give the following a hard pass: 1. Facebook comment sections (often a cesspool of delusional miseducated tirades) 2. “Parties” where I’m expected to buy stuff 3. Spending time with people who are toxic to my well-being 4. Measuring my worth by the number on the scale or the size of my pores

It takes practice to learn how to say no without drowning beneath a tidal wave of guilt. I used to be so concerned with keeping other people happy that I’d say yes just to keep the peace. But a more accurate description of what really happened in those situations is that I gave them my peace, leaving myself with nothing but regret and resentment.

I didn’t realize it in the moment, but I was doing a disservice not only to myself but to the other person as well. Why? Because the vast majority of people are not sociopaths, and therefore do not want you saying yes to them if you don’t really mean it.

There was a season in my life where I didn’t need much rest. I affectionately call this period “my twenties.”

After a night out cocktailing with my neighbors, I’d hit the hay for a handful of hours before sliding out of bed at 5:30 am, hopping in the shower, and doing full hair and makeup. Then, after working a solid eight or nine hours, I’d prepare a gourmet dinner, watch “Parenthood,” and then jump on the treadmill or roll out my yoga mat around 9 pm. Rinse and repeat. 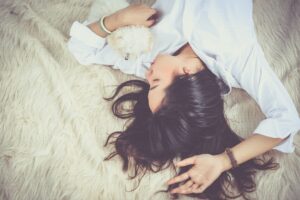 Two kids and a puppy later, I’m yawning by lunchtime and studying the clock, trying to figure out whether I can sneak in a nap. Sometimes by “nap”, I mean playing Candy Crush on my phone, but the purpose is the same: to take a freaking break. And needing a bit of rest is nothing to feel guilty about.

#4: Standing up for myself

Like many women, I’m a people-pleaser by nature. I used to break out in a cold sweat if I thought someone was mad at me or disagreed with me, or just plain didn’t like me.

But guess what? That’s their problem—not mine. I don’t need to feel guilty about that one bit.

It’s challenging to stay calm and collected when the person I’m standing up to is someone I respect. Or maybe I’m related to them, or I rely on them for something, or we have a history together. Whatever the reason is, it’s just not a good enough one to justify allowing myself to be trampled upon.

Yes, I pick and choose my battles here. If my best friend tells me she thinks my shoes are ugly, I’ll just laugh and tell her she wouldn’t know fashion if it bit her in the ass. But if she does something heinous, like challenging my integrity? Hold my beer.

Wanting more out of everything—career, relationships, money, life in general—is both a blessing and a curse.

Wanting more means I never stop pursuing the next thing. On average, I give myself 24 hours to celebrate a win before that little voice inside my head starts whispering, “Okay, but what’s next?”

I used to harbor guilt for never feeling like I’m doing enough, or achieving enough, or earning enough. I felt guilty because I knew I had everything I needed in my life (and then some), so it seemed like wanting more meant I was greedy or ungrateful. It’s not that my life is especially glamorous (for example, yesterday I scrubbed puppy poop out of my dining room rug), but I know how fortunate I am.

But wanting more—unless it borders on unhealthy obsession or unfair play—is nothing to feel guilty about. Do you think most men overanalyze their need to always strive for more? No.

What are some things you’ve stopped feeling guilty about, and how did you overcome them?

Katie Gray is a wife, mother, sister, and friend. She a yoga loving, sugar addicted, craft beer drinking ex-banker now living her best life as a writer. She live in Northern IL with her husband and their two boys, 4 and 2. You can read more over at her blog, Women With Kids, or follow her on Instagram.

We Made Whipped Chocolate Milk!

An Open Letter from the Mother of a Bully